“It Don't Mean a Thing If It Ain't Got That Swing” is Duke Ellington's homage to a musical “Groove",  and, more precisely, a particular rhythmic nuance called “Swing".

This quality of “Swing” found in jazz music is hard to describe in words. A repetitive rhythm in the music can evoke a pleasing reaction in the listener, often a physical reaction, and it brings a feeling with it that heightens the mood. It can inspire and enhance dancing. 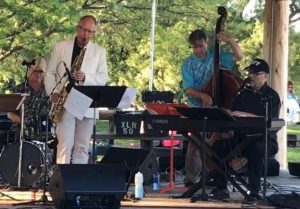 “Groove” is a word used mostly in later forms of pop and jazz music, and “Groove” is an umbrella category which includes “Swing".

“It Don't Mean a Thing” came out in 1931, very early in the “Swing Era” of jazz and popular music which lasted into the 1940s. As "Swing" developed, Count Basie, of all the big bands, emerged as the most highly respected swing ensemble, even into the 1960s and later. Even today, musicians and discriminating listeners pay attention to music that swings and can be dismissive of, or indifferent to, music that doesn't swing.

I first experienced the swing feel hearing my dad's piano playing as I was growing up. As I started playing gigs, I noticed that the older musicians I worked with had a natural feel for playing swing.

At one of my early gigs with players I had just met, they asked me to call a tune. I picked “A Foggy Day.” I couldn't believe it when the bandleader set the tempo slower than what I was used to.

But boy, did it swing!

And the musicians' faces beamed with great joy playing a perfect swing tempo. Lesson learned! With the be-bop and modern jazz I was fixated on at the time, swinging wasn't always the main focus.

A bare-bones description of swing might be:
“An acoustic bass line played in sync with a ride cymbal with a triplet feel.”

Here's an example with Ray Brown on bass, Gene Harris on piano, and Garryck King on drums playing a Count Basie composition called “Easy Does It”:

There are several things to notice here:

Drummer Garryck King is a Chicago cat, and I first heard about him when I was playing at the Underground Wonderbar at a late-night jam session. Singer June Yvonne came up to me after the set and asked me if I wanted to join her south-side jam session on 83rd street. She said Garryck King was usually on drums.

I said, “Wow, I'd love the chance to play with Garryck. I love his work with Joe Williams and Ray Brown.” She said, “Well, you just played with him. He was playing with you the entire last set!”

I said, “Really! Yup, that was a swinging set!”

I did end up playing often at June Yvonne's jam sessions, and later on, hired Garryck for other gigs.

Dick Buckley, a Chicago jazz DJ, once remarked that the swing era started for him when he heard trumpeter Wingy Manone's version of “The Music Goes 'Round and 'Round,” which came out around 1936. (Link is below). Now, Wingy Manone is not a major name in jazz, but he has some “swing” credibility since his 1930 composition “Tar Paper Stomp” has the exact lick used in Glenn Miller's 1939 recording of “In the Mood.” We still hear “In the Mood” today at parties, weddings, etc, and it is the most enduring “swing” composition of all time.

I'll leave it to history to decide who stole from whom.