I’m re-posting the blog, a total of 6 posts, that I created and posted during the course of the gig in 2003.

During my time there I was able to travel a bit, even though I played 6 nights a week in the Bar Casablanca. The trains were very efficient. In August I visited the city of Marrakech.

Here is part five of the original six blog posts, which posted on August 23, 2003--enjoy!

The Crosby, Stills & Nash tune was going through my head during the 3-hr + train ride to Marrakech on Sunday, August 17, 2003.  People had been warning me not to go since it’s so hot there (40-45 C or 104-113 F) this time of year. But last week I met some English-speaking French Moroccan girls in a restaurant in Casablanca who were going there and offered to meet me and show me around. That spurred me into action, though I never did find them, but I did make a lot of discoveries on my own!

As the train was pulling into the station, I met a man named Aziz who owns a shop in the Medina. He invited me to stop by his shop for lunch, or at least tea, while I was in Marrakech. Then he politely gave me directions to my hotel, which was walking distance, and saved me a cab fare. I walked through the desert heat, which felt good since the air conditioning on the train had been cold. The Hotel Harti had been recommended by an Austrailian tour group leader who has been bringing her groups into the Hyatt regularly to hear me play. The problem was, I hadn’t thought a reservation would be necessary and the hotel was full. A cab driver offered to take me to the other hotels on my list until I found a room--and for this he wanted $5. I bargained and he agreed to $3. Two more hotels later, Hotel de la Manera, had a room available for $38. The cab driver said, of course I didn’t have to pay him $5, but.......I ended up giving him the five. The hotel was simple, had a very nice lobby, a pool, private balcony, was close to the Medina, and also had a rather loud air conditioner in the room. I was tired from a short night’s sleep, but was anxious to see the Medina, so right away I set out walking into the oppressive heat.

The walls of the Medina were right across the street from the hotel, but it took a while to get to the old city’s entrance. Then there was a long walk past a large park to get to the shopping area. The hotel had supplied a crude map, and I took out Azziz’ card to see if I could locate his shop. I had no idea where I was, but a couple friendly guys noticed me and offered to help. One said Azziz was his cousin, but he knew of a better shop. I said, “Yeh right--everybody’s your cousin!” They seemed to have trouble locating Azziz’ shop on the map. He said, “But come see my friend’s shop--it’s right here!” I was tired of being taken in by self-appointed tour guides, but--just to get it over with--I said I’d take a peek. One of the guys led me across the street and around a corner, and I said, “Ou c’est?” Where is it? I got somewhat angry with him and started to walk away, but he was very persuasive, friendly, and smiling and insisted I come to the shop just to see, not to buy. Twenty minutes later we came to the shop on an unlikely, non-descript street. We walked into a room whose floor and walls were full of carpets; and I noticed a beautiful artistic design on the ceiling, and I couldn’t wait to take a picture. Then I started to notice the beauty and quality of the colorful carpets, and I was introduced to his friend, Saddek.

Saddek gave me a great Carpet 101 class and showed me a large variety of colorful new carpets, as well as some old carpets which have a special value. He also showed me silk carpets and hangings. I wasn’t in the mood for such an intense sales pitch, however, and after refusing his smallest wall hanging, I left. His friend asked for a tip, and I refused, telling him, I hadn’t asked for his services (which I regret, but I was cranky from lack of sleep). If you want to see...[there are some pics of the beautiful carpets in the photo gallery below]

I had lunch at a very small restaurant and met a nice young man named Moosta. He wanted to take me to his home in the [Atlas] mountains near Marrakech, and, if I can, I’ll return to Marrakech before I leave Morocco.

There were many internet cafes, so I checked my e-mail, and started walking back to the hotel. I got way lost, however--the place is huge--and ended up taking a cab. I took a quality nap, and then walked back to the Medina for the evening’s festivities.

I took a long walk through the alleyways of the old part of the Medina, and the shops were similar to those I’d seen in Fes and Casablanca. I visited the snake charmers and then had coffee in a cafe overlooking the large open area, which, I understand, used to be the slave-trading area. Then the crowds came.

Lots of young people, Moroccan families, and others, filled the open area, and many food vendors started setting up. The sun went down, but the huge mounds of food were lit up, and it was a magical atmosphere. The Berber drumming, which accompanied their dancers and acrobats, filled the air constantly. It was a party! I sat down and had a delicious dinner of salad, fried fish, and potatoes--maybe the best food I’ve had in Morocco--for $4.

I went back to the Medina the next day, had some great fresh-squeezed orange juice, but never did find Azziz (from the train) or his shop. I finally noticed on his card that he sells carpets!

As I was leaving Marrakech, I waited for the train as I sat cross-legged on the cement train platform shown in the picture above. Several others were also waiting, and I struck up a conversation with a man who spoke particularly good English. We spoke about general things, and I asked him where he was from. He said he was visiting Morocco from Liberia. I asked him if he knew Charles Taylor, the recently resigned president of Liberia who had been accused (and was later convicted) of particularly brutal war crimes. The man refused to answer me and just smiled.

Another younger gentleman was sitting next to me on the cement, and he spoke very little English. We smiled at each other and spoke in friendly phrases for a few minutes. Then he made a point to show me his cell phone. There was displayed a crude  graphic, showing an airplane crashing into two towers playing over and over in a loop. 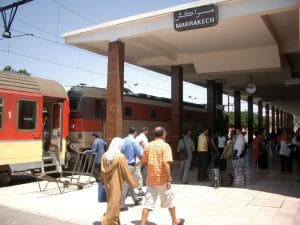 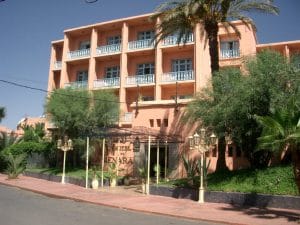 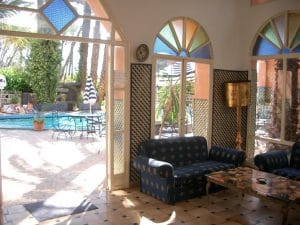 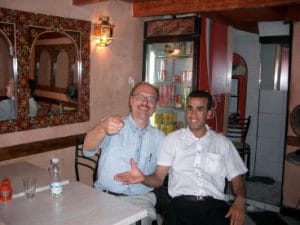 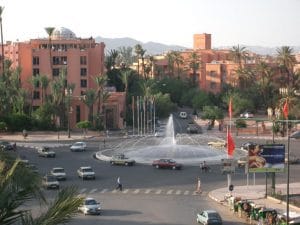 View of the newer part of Marrakech from my private balcony. 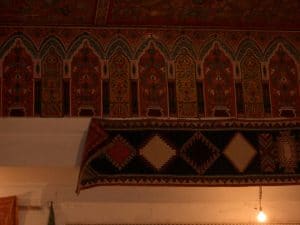 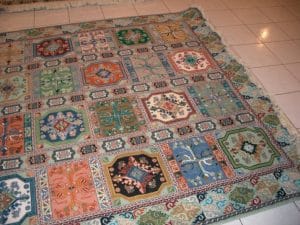 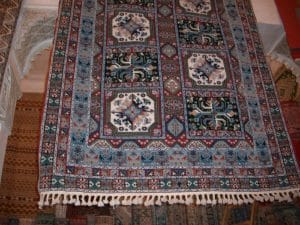 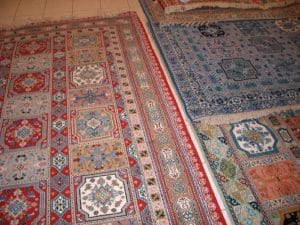 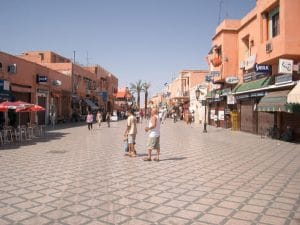 The first street I encountered was somewhat modern looking. 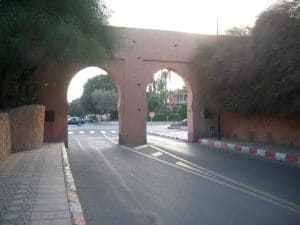 Entrance to the old Medina, looking out. 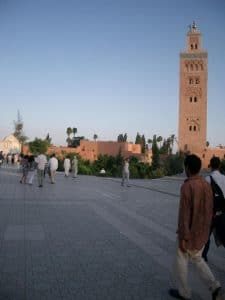 This mosque could easily be seen from most places in the Medina and was a good reference point. 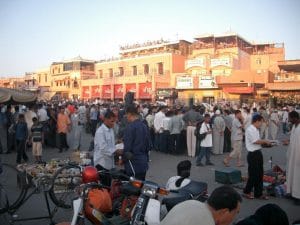 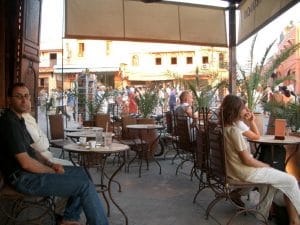 One of the many cafes, where I had a comfortable coffee break. 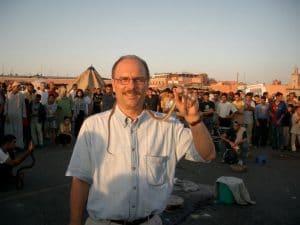 They were eager to take my picture with the snake--for a price. 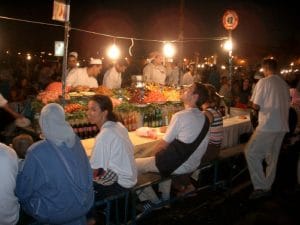 When night set in, dozens of vendors set up their food tables. 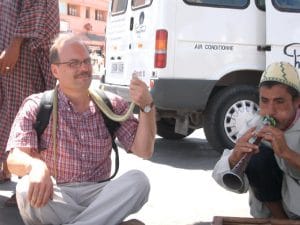 We agreed on $2 for a picture--then, afterwards, he asked for $10--but he could have at least waited until the van passed by! 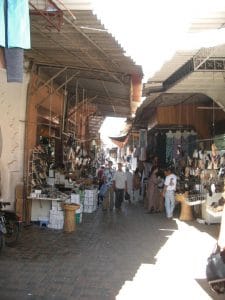 One of many alleyways in the older part of the Medina. 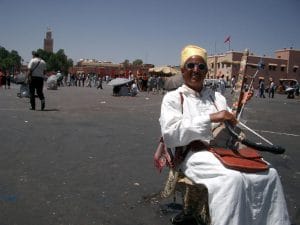 Not sure what that instrument’s called. 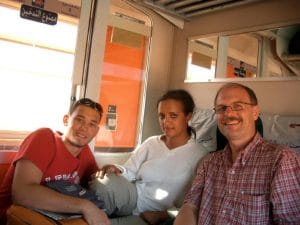 Henrik and Soad (who live in Sweden) and Steve on the train back to Casablanca. They were returning from Essaouirra, a coastal town west of Marrakech. Soad grew up in France, but her family is from Morocco. Henrik had the train compartment in stiches as he tried pronouncing Arabic words, phrases, parts of the body, etc. from an English/Arabic phrase book.