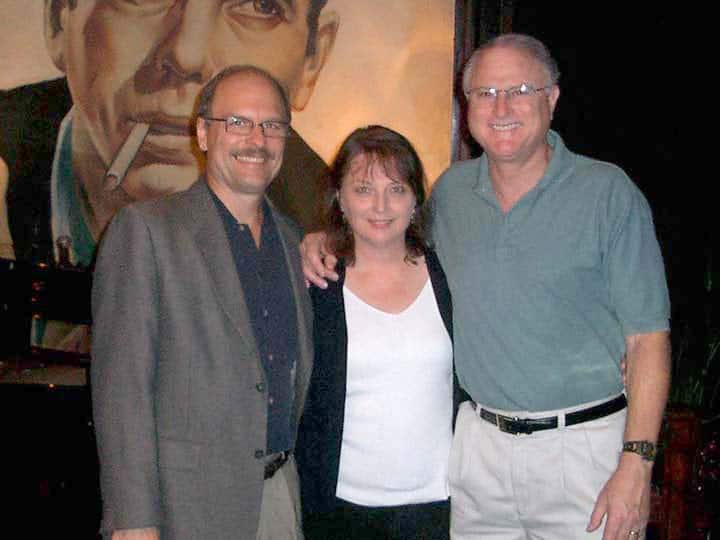 This is the last of 6 posts, that I created and posted during the course of the gig in 2003.

My friend Jeff Benton, who then lived in Chicago, was an airline pilot for United. He and his wife Cindy came for a visit in August.

Here is part six of the original six blog posts, which posted on October 14, 2003--enjoy!

My friends Jeff and Cindy Benton came to visit Casablanca for two nights on August 24. Ever since I was the best man at their wedding New Year’s Day, we hadn’t seen much of each other. We had a busy time in Casablanca: we visited the Hassan II Mosque, the exterior of which I see every day from my hotel room, and took the official tour. With the help of my friend Ichsane, who used to live in the US and speaks very good English, French and Arabic, we went shopping for tapis (carpets) in the Habbous shopping district of Casablanca. Then we all had a late night private dinner with Ichsane’s friend, Seef, a wealthy businessman from Oman, and he then took us out nightclubbing afterwards! Complete with late-night dancing to Arabic music!

Ichsane's friend, Seef, “happened” to meet us while we were shopping. Somehow, I think it was more than a coincidence! It may be that Ichsane was trying to impress me by creating a special night for my friends. I don't know. It is no secret that Moroccan girls often wish to hook up with American men, and Ichsane had previously let me know that she hoped I would take her back to America. She had already spent time in the US going to school.

We made plans to meet for a late night dinner. I had to go back to play piano at the hotel, and I was to to join them later. It was a slow night at the hotel, so I slipped out early, and took a cab to Seef's apartment.

I came in at the tail-end of dinner, had a few bites, and we whisked ourselves away to a nightclub picked out by Seef. It was dark and smokey, crackling with atmosphere and a live band playing Arabic music. A couple of belly dancers strolled from table to table. Seef let it be known that he was paying for everything, and ordered food and a couple of bottles of whiskey to the table.

Meanwhile, the table had grown to include more people. Ichsane was flirting with me, I think, but soon Seef asked her to sit next to him and banished his escort to a distant seat. I did get to dance one dance with Ichsane while she eyed me flirtatiously. At the end of the evening, Ichsane took a cab with me, Jeff, and Cindy. She said she was planning to spend the night with me! I said, fine, but mentioned that the hotel is very strict about overnight female guests (in accordance with the then growing strictness of Islamic culture). Ichsane seemed to think that it would not be a problem, and suggested we all enter the hotel as a tight group and “glide” to the elevator. It worked. I learned later that these rules are not as stringent for Americans.

When we got to the room, she was somewhat dismayed that I didn't have a multi-room suite. The previous Hyatt piano player, my Chicago friend Lynn Hilton (who had introduced me to Ichsane), was apparently upgraded during her stay. She made it clear that intimacy between us was not to be that night, even though we were sleeping in the same bed. We did, however, have a long (intimate?) conversation about our lives, hopes and dreams as we lay next to each other. The next morning, we took a back stairway to the dining room for breakfast. The hotel staff, who knew me pretty well, wasn't fooled, and they eyed me “knowingly.” I took a liking to Ichsane, and tried to call her the next day, but was unable to reach her for a few days.

Seef came in to the hotel bar while I was playing the next night for about 20 minutes. He wasn't super friendly. I kind of wonder if he and Ichsane hooked up? Last I heard, Ichsane had moved to London and was working as a hairdresser.

Since going to Marrakech in August, I haven’t done any major traveling. Business has picked up at the hotel: the Davis Cup tennis match between Morocco and Great Britain took place [in Morocco] in September, and many players, media personnel and support staff stayed at the hotel. Morocco ended up winning the contest.  The last week of August, I was able to visit the pastoral archaeological site called Chellah near Rabat. Some of its vestiges are the oldest in Morocco, dating back, I think, 2000 years.

Some of you have asked, “What do you do during the day?” Well, what does any musician do during the day? Here in Morocco, I’m not barraged with phone calls, and I don’t have to spend 3 hours in the car everyday. I go to the gym every morning then do some yoga. I try to watch ESPN world sports show every day, and sometimes there is a 30 second spot of baseball news. (This week’s tops sports stories: Rugby World Cup in Australia, European Soccer Playoffs, and Formula One racing! But the Cubs are in the playoffs!) Lately I’ve been listening to Cubs’ games on the internet till 3 or 4 AM. I might go shopping, I spend time working on French everyday (in three years I may start understanding it), and I work on the computer on my photos, the website, or e-mail. Friends might drop by and, and things are often done spur of the moment. I may need to talk to the manager about something. Four times I’ve had to move completely out of the hotel when they absolutely needed my room. It’s not boring.

The Chicago Cubs baseball team entered the playoffs that fall (2003), and they seemed have an excellent chance. The internet was not working well in my room, however, so my only chance to listen to the games was to use the hotel business office. They gave me special permission to use the office at night, and maintenance had to rig up a special audio connection so I could use earphones. The games started about 1 or 2 AM Morocco time. I listened to Pat Hughes and Ron Santo call the games. As I listened, I looked out the window over the still-busy street full of people and traffic at the side of the hotel, along with a faint sound of Arabic music. I was listening when the Cubs had an excellent chance to win game 6, and Pat Hughes mentioned that a fan, [Steve Bartman], had interfered with a foul ball that Moisés Alou probably could have caught, and that would have given the Cubs and excellent chance to win the game and go to the World Series. With their momentum frustrated, the Cubs eventually lost the series.

The next morning, one of the staff asked me how I enjoyed the baseball game. “Didn't I hear that a fan interfered with a foul ball?” he asked me. I'd learned that Moroccans have no interest or knowledge of baseball, so I was surprised to hear this question! When the World Series was about to start, I searched for a place to watch on TV. I even called the embassy, and they said they didn't know of any way to access the World Series on TV. The day of the first game however, I saw the hotel staff rolling a large TV in to the bar! I smiled and said, “I'm so happy that you're showing the American baseball World Series!” They said, no, we will be showing the Rugby World Cup match from Austrailia! 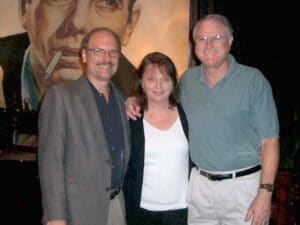 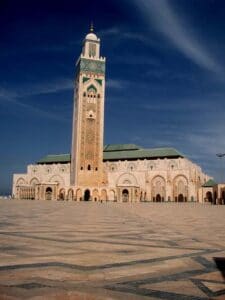 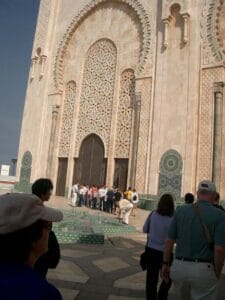 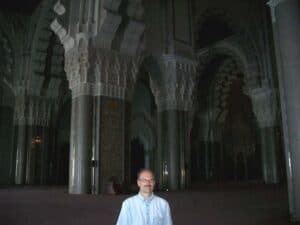 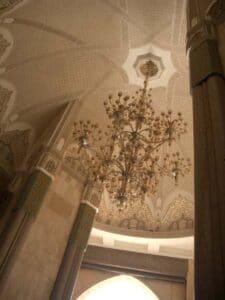 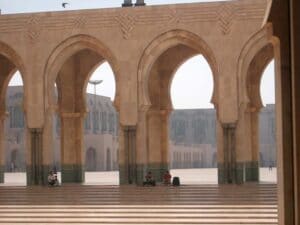 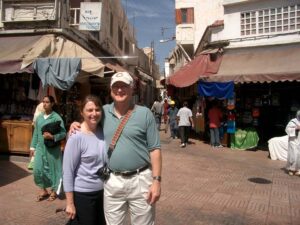 Jeff & Cindy shopping in the old medina near the hotel 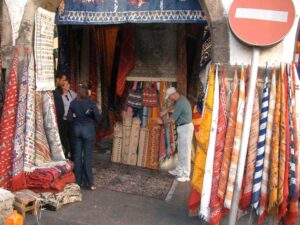 Nous somme juste regarder les tapis a Habbous--”just looking” at carpets in the Habbous shopping area. THe shopkeepers prefer to bargain in Arabic 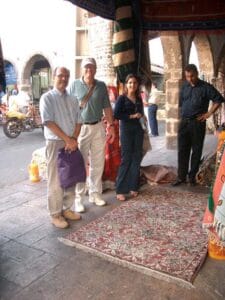 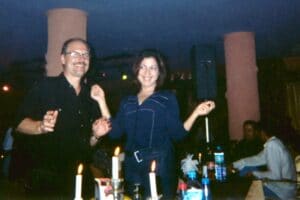 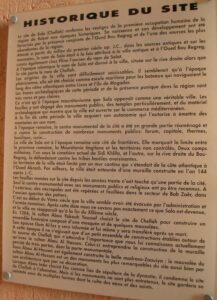 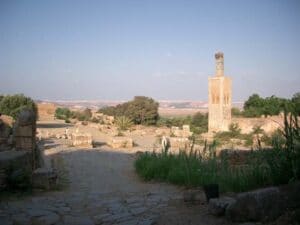 Part of he Chellah site 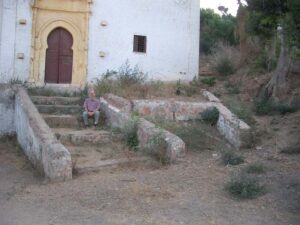 The body of a famous saint is entombed inside this building, and I was given permission to go inside and light a candle. 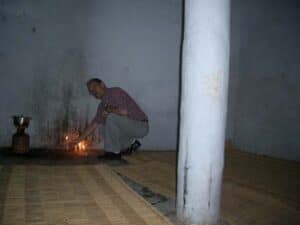 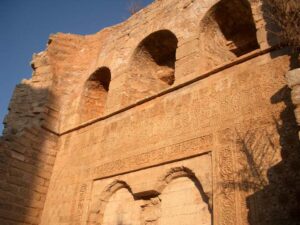 More views of the Chellah site. 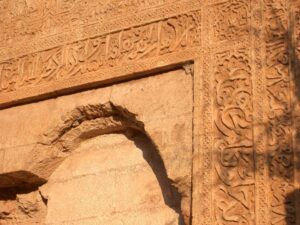 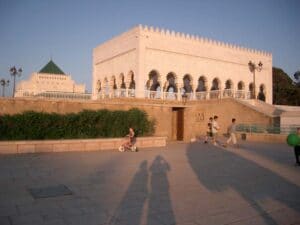 Mausoleum of Kings Hassan II and his father, King Mohamed V, in Rabat. 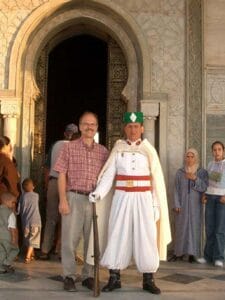 Entering the mausoleum. Pictures were not allowed inside, but the rich display of gold and its hand-crafted decore are stunning. 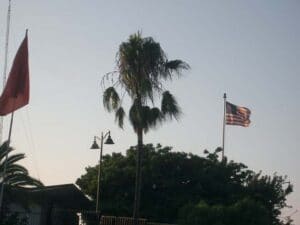 The American embassy in Rabat. The guards eyed me suspiciously even as I took this shot. 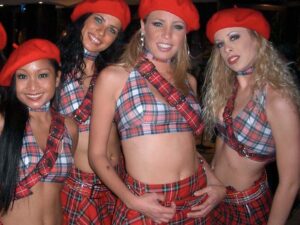 Les danseuses francais, French dancers, after performing at a British corporate function at the Hotel. Too bad my French wasn’t a little better! 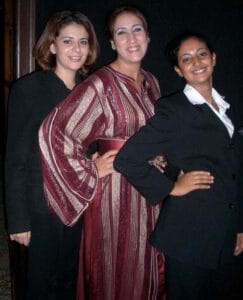 Three night hostesses at the hotel, Dalal, Houda, and Miriem 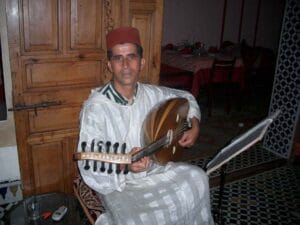 Musician playing traditional music at a restaurant in Rabat, some of the most compelling music I heard in Morocco. His cell phone is ready is case he gets a call for a gig! 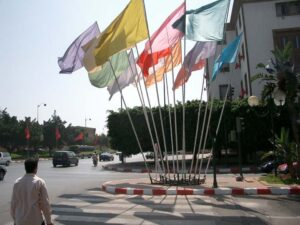 Les drapeaux, flags, on the streets of Rabat. 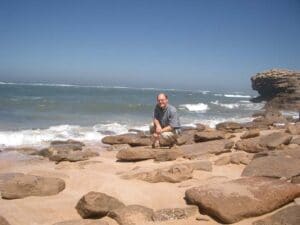 The Moroccan coast on the Atlantic ocean south of Rabat 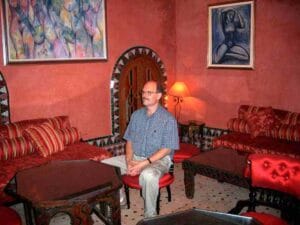 A side room, nicely decorated, in the restaurant in Rabat.