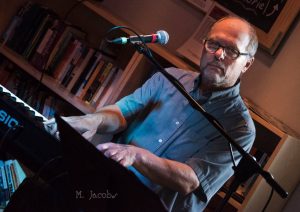 In the fall of 1971 I was hired by Detroit agent Graham Prince to play behind a singer in a show band he was putting together for a gig in Lima, Ohio. I liked the idea of accompanying a female singer since it would undoubtedly bring better entertainment value to the audience.

What I didn’t expect was that Graham would insist that I sing too. Previously, all my piano gigs had been instrumental only. I liked the idea of singing, and I also needed the gig, so I put my heart into learning some vocals and accompanying myself on piano.

The first song I sang live at that gig was “Yesterday.” Graham was very encouraging, and he mentioned that a gentleman sitting at the bar made a sincere comment that my singing was “very nice.” This praise from the audience bolstered my confidence in a big way, though today I wonder if Graham was telling me the truth! I’m sure my singing sounded a little rough.
During the breaks, Graham would take me down to the basement of the restaurant and give me pointers on singing. At the end of the gig, I had learned six songs.

He gave me basic singing instructions, singing measured tones on various syllables, which forces you to relax and focus on a steady vocal sound. That technique improved my range almost immediately and helped with breathing more naturally while performing. Playing piano and singing at the same time was difficult at first since I couldn’t concentrate fully on either. As a result, I was conscious that I wasn’t doing my best work in singing nor playing, which was frustrating.

That’s why I think simultaneously singing, and playing is, in a sense, a different instrument, a different mode of performance, and it needs to be approached and judged differently.

First and foremost, I think of myself as a pianist, and I am a pianist who happens to sing. Nat Cole was an early example of a jazz/pop pianist/singer, and I have appreciated him more and more over the years.

Oscar Peterson said that singing and accompanying yourself is a rare talent and that there was nobody better than Nat Cole. Oscar probably found out how hard it was when he recorded his album “Oscar Sings” as a singer/pianist!

Having some facility as an instrumentalist is a helpful background to have when starting out. Nat Cole started as an instrumentalist, and his audience would request that he sing. Judy Roberts, Chicago-based pianist/singer, told me of her first experience singing on a gig: A guy at the bar asked her if she knew “Fascination.” She said, yes, of course, and she started playing it. He stopped her and told her he wanted her to sing it. She told him, “I’m sorry sir, but I’m only a pianist, and I don’t sing. He said again, “Sing it!”, and he pulled out a gun and placed it on the bar. She sang it, and she continued thereafter singing on her gigs. Rough neighborhood!

I have also known singers who have developed their instrumental skills so that they can accompany themselves on gigs. In general, I advise singers to do this, since it can also be helpful in learning songs in a musical context, whether or not they perform self-accompanying all the time. 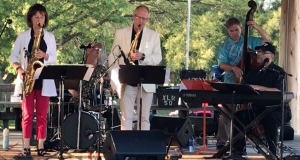 But I’m especially happy to have the skill to be able to accompany myself since it is fun, gives me complete control of the performance, and it opens up gig opportunities I wouldn’t have as just an instrumentalist or a stand-up singer.