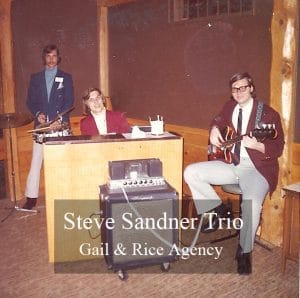 I met musical agent and businessman Max Gail, Sr., in November 1971, after driving through a snowstorm to get to his Bloomfield Hills, Michigan, home for an 8am appointment. He was looking for a piano player who could sing. He had a mini acoustic piano in his kitchen area, and he and his wife listened to me play as they ate breakfast. He asked me to sing, so I went into “Yesterday,” the Beatles song, one of six songs I knew how to sing. He said, “You haven’t been singing for very long now, have you?”

He was right. On my previous gig, two weeks in Lima, Ohio, I had just started singing with the encouragement of agent Graham Prince. I had struggled to split my brain to play piano and sing at the same time. I’m sure now that it was horrible, but I found that I liked singing, and I had gotten some positive feedback, so I wanted to keep at it.

“You will have a sympathetic audience at this private club, so I think you’ll be OK,” Max said. “You can learn songs as you go, and you can have the lyrics in front of you on the piano. The people will appreciate your effort, and they’ll go with you!” Sure enough, that’s what happened. He placed me on a year-round gig at a resort in northern Michigan; I was there for almost four years, and I learned vocals to hundreds of songs.

Max had a son, Max Gail Jr., who later became famous for his role as Detective Wojciehowicz on the TV show “Barney Miller.” Max Sr., was certainly well known in Detroit society circles as a wealthy businessman. He had started his entertainment agency, Gail & Rice, in 1931 from his home office. At the time I met him he also had a thriving office supply business with his main store at the Penobscot Building in downtown Detroit. The Gail & Rice Agency had their office nearby in the Marquette Building. It was known as the best and biggest entertainment agency in Detroit.

Max suggested I go to his downtown agency office to make myself known to his staff of agents. I drove to downtown Detroit and walked into the Marquette Building where I met the receptionist, Dennis Qualey, who was later to become my drummer on the upcoming gig. One of the agents, Warney Rhule, wasn’t too busy, so he took time out to talk with me, and asked me to play piano so the rest of the staff could listen. I nervously played a string of songs, but I didn’t get much of a reaction. Warney did ask me to come to his next gig though with his big band at the Detroit Golf Club. I did, and Warney asked me to join his band. I had to say I was going to be busy in northern Michigan on Max Gail’s gig.

Once I met Max at his office supply store in the elegant Penobscot Building, tallest building in Detroit, after he’d agreed to loan me some money for a vocal PA. The PA that was used on my previous gig was for sale for $500. It was a state-of-the-art 20-watt 6-channel Shure Vocal Master. Max was quick to agree to loan me the money. I had to borrow the entire amount, so he handed me a check for $500. He joked that he didn’t usually have that much money laying around “not doing anything.” I paid him back $25 a week. Along the way, he said he’d lost one of my checks, but, somehow, that check later got cashed too. So I guess I paid a little interest!

I took my envied, newly acquired PA to the new Gail & Rice location on Grand River Avenue and rehearsed with my new trio. Graham Prince had given me the name of a bass player, Dave Mulligan; and Dennis Qualey, who worked in the Gail & Rice office, played drums. We played some old standards, some jazz, and a couple of dance tunes I’d just learned on my last gig, “Proud Mary,” and “Joy To the World.” The three of us fit well together, and this mix of music worked pretty well on the gig. We were the younger generation, but we could play old standards too. The society crowd seemed to like the youthful music in our repertoire. With some difficulty, we learned how to play soft enough for the boring cocktail parties!

My trio started the gig in Gaylord, Michigan on December 11, 1971. The Otsego Ski Club was known as the oldest private ski club in the country, and it also operated during summer months. From time to time, Max Gail would take the 4-hour trip north from Detroit and look in on us. He made sure we got better looking dress jackets to help us fit in with the well-dressed Detroit society crowd. He thought that we were playing too many slow-tempo songs on weekends, so he had us pick it up a notch. He told us about his leading a band and calling “Tiger Rag” in the first set. “Don’t hold back, it’s never too early for a show-stopper,” he said. He also helped us to deal with a banjo player who sat often sat in and wore out his welcome on stage. Max said, “Since you have the mic, just announce, ‘That was Larry on banjo, let’s all give him a round of applause!’ ” It worked, got him off the stage, and I have used that technique a lot through the years!

By the summer, I was able to pay cash for a new car, a $2000 Ford Pinto. I was proud to show Max my new car. Max came to visit several times that summer, and there were always issues to deal with. The club owner thought our breaks were too long and went into a tirade with me one night, swearing profusely. Max arranged a meeting; and, while Max defended me, he did ask that we play longer sets with shorter breaks. We did, and we restored our job security somewhat!

When the new contract came up, however, the owner asked that 5 minutes maximum break time be written into the contract. Max refused to do that, since, he said, “Sometimes taking a longer break won’t hurt anything.” Max and the owner trimmed the music budget by cutting out the bass player and having me play the club’s Wurlitzer organ with bass pedals. Max also encouraged me to buy a Fender Rhodes electric piano. Just before I left the gig, I also bought a Hammond B-3 organ, and the Rhodes and B-3 became my go-to keyboard combination.

The Otsego Club gig was 40 weeks a year, and Max would help us fill in the down time. Dennis, the drummer/agent, tracked down a gig in nearby Traverse City at Bill’s Dill’s, a busy downtown bar, when 18 year olds were allowed to drink. With a couple of phone calls, Max helped us get top dollar, and he didn’t take a commission. He also booked us at the Troy Holiday Inn in the Detroit area. Max made sure that rooms and meals were provided. Those were the days! Max also talked about me playing at Mackinac Island’s Grand Hotel, which he also booked, though that didn’t happen till years later.

Max had us play other locations around Detroit like Orchard Lake Country Club, Detroit Yacht Club, and the stately (if not stuffy) Detroit Athletic Club. We played a couple of times at the DAC. Max met us before the first gig. I was wearing a light blue shirt, and he said that was not proper for the DAC. A white shirt was required from then on. The second time we played there, we had a somewhat rowdy table near us which was out of character for the club. They said they were thrilled to see younger musicians. “Could you play some Beatles and Rolling Stones?” they asked. “No,” we said, “we have to behave ourselves,” but before the night was over we gave in. We played nearly a whole set of loud Stones, Beatles, and rock tunes. Songs never heard at this club before. Most of the room got up from their tables to dance, but we were never asked back. Max, entertainment savvy as he was, probably realized that it wasn’t completely our fault, though he did mention it. He upbraided us, but I could sense inwardly he wasn’t all that upset.

Finally, the inevitable happened, and Max called me to say the gig at Otsego was over. He had been refusing to take his 10 per-cent commission for the past year anyway. But Max was always there for me when I needed him. He got me a longer standing gig at the Troy Holiday Inn, and I moved to Detroit planning to put a band together. Max, Al Rice, and Warney Rhule all came to see me while I played in Troy. I overheard Max talking about my musicianship, saying, “This kid has a great ear.” It’s really something having a friend and an agent who really believes in you! I met several great local Detroit jazz musicians and singers in Troy. One memorable night, Burt Bacharach’s backup orchestra stayed there and we jammed! I’m pretty sure Hal Blaine was on drums. Then, when Detroit didn’t work out, I moved to Chicago and put a band together for the Gaslight Club.

I lost touch with Max for a few years, and then I moved back to Michigan in 1981. Dennis, my drummer from Otsego, had bought a club in Traverse City, and I soon found other gigs in the area. I called Max, during a break at my Waterfront gig, from a pay phone. It was the last time that we talked. We exchanged a few pleasantries, and I told him I was still working as a musician. He said, “I always thought you had a lot of talent.” Thank you, Max Gail! You took a chance on me, supported me, and you gave me my start. I am forever indebted.