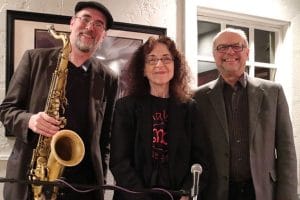 I first saw Judy Roberts perform at the Back Room on Rush Street, Chicago, in 1975. In those days, Rush Street was crackling with entertainment, and Judy had one of the premiere Chicago bands. She sang and played an electronic keyboard, and her quintet had a hip jazz fusion style. I remember the musicians in her band were extraordinary, and I believe it included Neil Seroka on guitar and Phil Gratteau on drums. The room was packed, and the audience was fully attentive. A couple at the next table rolled a joint, and the aroma soon filled the room. No one seemed to mind. Judy displayed dazzling piano technique along with engaging vocals and plenty of audience interaction. She played a hip arrangement of “One Note Samba.” During her break, I passed her in the hallway, and she said hello to me. I was thrilled! The famous Judy Roberts! That evening’s experience planted the seed for Judy becoming my mentor.

A few years later, I started working more in the Chicago area and I often traveled from Michigan and stayed with my buddy, Ed Williams, who lived just off Lincoln Ave near Wise Fool’s Pub, a trendy Chicago nightclub. I had a Sunday night off, so I walked over to Orphan’s, another one of Chicago’s trendy nightclubs, to see an eclectic duo, Rokko and June. They were known for their witty and artful original songs. I was sitting alone on a long bench next to the wall, and Judy Roberts walked in, alone, and sat down right next to me! I’m sure I shyly mentioned that I was a working piano player, but it didn’t matter at the time. We had a nice conversation, mostly me listening to Judy’s no-nonsense, often funny, opinions on music, musicians, and other issues, as we enjoyed some great music by Rokko and June.

Starting in the early 80s, Judy and I had the same Chicago agent, Joy Dickens. Joy suggested that I visit Judy’s gig in the northwest suburbs when I was playing at Sage’s in Arlington Heights. I casually mentioned my plans at the piano bar, and a number of patrons and staff from Sage’s joined me at Judy’s gig. Most music fans in the Chicago area knew about Judy and her entertainment skills, and the group from Sage’s was happy to get to see her on a rare appearance outside the city! We all sat at a very large table and had a great time, and I was proud to introduce Judy to my friends.

One of the places Joy Dickens booked was the Intercontinental Hotel on Michigan Avenue, and this became Judy’s home base for many years. The room was a large and elegant corner space in the lobby with comfortable sofas and bar service. Looking out the windows, you could see the Wrigley Building, the Tribune Building, and the Michigan Avenue bridge. It was an extraordinary venue, with a quality Baldwin grand piano, and a scenic view. Judy quickly made it her own and developed a jazz audience there. Weekdays she played solo, and on weekends she had a trio.

I often went to see Judy at her Intercontinental gig, and would learn from her by watching her in action. Judy’s personality was dynamic and one-of-a-kind, and she had her own musical style. This reinforced my own belief in trying to find an original approach to a song, not robotically copying other arrangements or recordings. She had influences of Bill Evans, George Shearing and others, but she added her own creative elements as well. She picked songs that were hip, but always connected with the audience. With her trio, always extraordinary musicians, she was relaxed and spontaneous. As many of her followers know, she has a knack for creating magical evenings of musical entertainment. Many of the top musicians in Chicago came regularly to see her. I also took note of her expertise in dealing with room and hotel managers and how she could sometimes sustain her standing with the gig beyond what it would normally have been. It was a comprehensive course in Judy 101.

Judy taught by her example, and did more than that for me. I met the musicians in her band and other singers and musicians who came to see her play. Sometimes she’d have me sit in, and often we’d play spontaneous 4-hand piano duets. After getting to know her band, I’d ask them to play gigs with me. I met drummers Greg Sergo, Charles McFarlan, and Rusty Jones; bass players Jim Cox, and Stewart Miller; horn players Bobby Ojeda and Greg Fishman; and singers such as Libby York and Paul Marinaro, who would ask me to play on their gigs. I’d try to reciprocate by bringing my friends trumpeter Marcus Belgrave and Danish sax man Jesper Thilo to Judy’s gigs. I’d also bring some of the Chicago musicians to Michigan for some interesting jazz tours.

When Judy played other gigs, like Chicago’s Jazz Showcase, I’d sit in for her at the Intercontinental. When Joy Dickens booked gigs overseas, Singapore and other places, I’d sub for Judy for several months at a time. I was a part of the Chicago scene!

In September 1989 it was my turn to bring a band overseas to Joy Dickens’ Singapore gig. I came with a quartet in time to see Judy’s band on their last night at Singapore’s Westin Hotel. When we chatted later than night, she said it was good I had a couple black guys in the band, since Singaporean audiences seemed to expect that. She also shared an intuition that she sensed trouble. She was right. Several weeks into my gig, my bass player was found to be using heroin – a capital offense in Singapore. About the same time, he had a heart attack, which in an odd kind of good fortune, gave reason for his swiftly leaving the country.

Judy played gigs in Arizona, and I first heard her play in Phoenix at Timothy’s Pub in 1997. The first night I saw her there she had Neil Seroka on bass. Harry Caray, the Cubs’ announcer, was in the audience. The 1930s standard “How About You” has a line: “and James Durante’s looks – give me a thrill…” Judy sang: “and Harry Caray’s looks – give me a thrill…” In 2001 I started playing in Tucson, and I drove up to Phoenix to see Judy in concert with vocalist Margot Reed. I also saw her with Chicago pianist Danny Long at Remington’s in Scottsdale. Soon Judy extended her time in Arizona to several months during the winter. I did the same thing, working winters in Sedona and northern Arizona; and spending summers in Michigan.

I often visit Judy on her gig in Scottsdale at Malee’s with vocalist Renee Patrick. Judy has also come to play with me at Dahl & Di Luca restaurant in Sedona. Judy and I played our first actual gig together, with her husband Greg Fishman on tenor sax, in December, 2017. It turns out that the restaurant owner, award-winning Chef Lisa Dahl, is a huge jazz fan, and Lisa’s father was a huge fan of Judy’s and had often heard her perform in Chicago. We continue with this format–Judy, Greg, and me–again at Dahl & Di Luca December 6, 2018, and, we hope, many more times in the future!