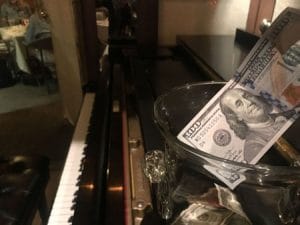 As a musician, receiving a tip of five 20s is nice, but there’s something special about finding a $100 bill in your tip jar. Or sometimes the customer will openly tip you a $100 bill with a flair. Either way, it doesn’t happen often enough!

I can’t say how often it has happened that I received a $100 tip from a customer, probably about 10 or 15 times. A few times one customer has given me over $200 during the course of an evening. Sometimes it is to request a special song, or sometimes I’m asked to play longer. The most fun is to have a $100 bill in your tip jar at the end of the gig and not know where it came from!

I was asked to play a gig accompanying Anne, a female singer new to performing. She was in her late 60s, and she wanted to occasionally get away from her farm life and sing songs from the Great American Songbook. She had a lot of heart, did her best to know her keys, and had a lot of friends who showed up at her gigs. Our first gig together was at a Michigan supper club which had seen better days, and they had a low budget. She was happy to give me the bulk of the night’s pay since I had experience working with singers, and I was happy to do what was needed to make the gig easier for her.

We were just ready to start performing, and, at the last minute, she pulled out a tip jar that she had brought. I told her I thought it would be a good idea to put some money in the jar before we started. I looked in my wallet, grabbed a few ones, and hurriedly put them in the jar.

Those days I was in the habit of carrying a $100 bill in my somewhat disorganized wallet. I discretely looked through my wallet and did not find a $100 bill. I was pretty sure that I had put it in the tip jar by accident at the beginning of the night. It would have been awkward, at best, to say anything, so I decided not to bring it up. She asked for most of the tips, since I was getting more of the pay. I agreed, trying not to show any disappointment, thinking that by avoiding any awkwardness, she might ask me to play more gigs.

Sure enough, Anne and I played more gigs, and about a year later, we were performing at a cool, funky, jazz dive-bar on a college campus. She had a girlfriend with her who was much younger and very pretty. Anne was clearly trying to fix me up with her friend, and it worked! I went out with her friend several times over the next few months, and we are still friends to this day.

On our second date, Anne’s friend and I went to a nice restaurant and had our first in-depth conversation. We talked about our mutual interest in yoga and Eastern philosophy. “We’ve had this conversation before,” she said. I said, “Really? I don’t remember!” I was somewhat embarrassed.

“I know you don’t remember, but we met and talked briefly when you played your first gig with Anne. By the way, did you know that I put a $100 bill in your tip jar that night?”