In June, 2003 I travelled to Casablanca, Morocco for a 4-month gig at the Hyatt Regency. I got the gig through a referral from Lynn Hilton, a Chicago piano player friend whom I knew from hanging out and playing at the Underground Wonderbar, Lonie Walker’s Chicago nightclub.

I picked up the phone and called the manager at the Casablanca Hyatt and was able to book the gig myself, with the help of a testimonial from Lynn!

In May, a month before I was to travel to Morocco, there was a series of suicide bombings in Casablanca, including a Western-owned hotel near the Hyatt. I called Lynn. She said, “No problem, you’re still coming! After the bombing, security has become so intense, this is now the safest place on the planet!”

The gig was solo piano & vocals on a Yamaha grand piano in a large bar area. Behind the piano, was a painting of Humphrey Bogart smoking a cigarette and pointing a gun above the piano player’s head!

I’m re-posting the blog, a total of 6 posts, that I created and posted during the course of the gig in 2003. Here is part one, and the others are to follow soon—enjoy! 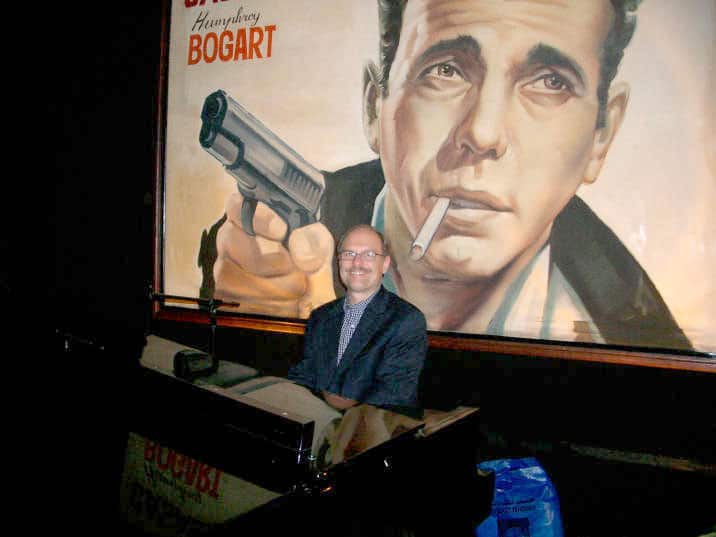 After a 4 hour delay because of a missed connection, my Air France plane finally landed in Casablanca at about 3:30 PM GMT Sunday.  The first thing that hit me was that the signs, as well as the conversations I heard, were in French and Arabic—no English!—at the airport.  I was tentative in going up to the information counter and speaking English, but the man there did understand me. I had trouble finding the driver from the hotel and the cab drivers were all over me.  After 20 minutes and seeing no car from the hotel, I picked a driver and went back into the airport to change some money so I could pay him the roughly $20 US for the ride. Then another cab driver told me my driver was out there and he followed me to the hotel’s car to make sure I tipped him! Some of the first architecture I notice is mosque-like—buildings, windows with Arabic-like designs—and during the drive from the airport I wondered if some of the buildings I see ARE mosques. The desert landscape outside the city reminded me of Arizona more than Illinois. But in general there is a third-world feeling–some unkempt garbage-strewn areas, and even some of the main downtown buildings show rough unfinished areas on their facades.  The pedestrians and drivers alike proceed with a macho spirit of lawlessness as their rights-of-way are challenged.  The pedestrians are numerous and especially crazy! It’s a wonder I didn’t see an accident today.

At the hotel, the check-in was easy and most of the staff speaks some English. Lynn Hilton, the piano player who referred me to this gig, showed me around, and then—after a really harrowing cab ride–we went to an oceanside café and bought some doughnuts before dinner!  I see now that any French I studied is going to come in handy.  We went to a restaurant in an unlikely location inside what looked like an old Roman fort.  But inside was a beautiful landscaped indoor/outdoor restaurant with a waterfall and a delightful local-cuisine menu (in French). French was a must here and I used a few phrases, like “L’addition, sil vous plait.” Lynn does very well with her French. I had a chicken kabob (very tasty–this was the real thing!), variety salad, and some great pomme frites (french fries).

Lynn showed me the room I’ll be playing in.  It has a nice 6 ½ foot Yamaha piano and a small stage with a large painting of Humphrey Bogart holding the gun as he does in the scene at the end of the movie! I’m edgy and anxious to get started. Lynn plays tomorrow night, and I’ll be hanging out, and she promises I’ll meet some of the regulars and her friends.

Today is my opening, and I have had meetings with Nicolas and the GM Jean Pierre Marcadier.  Jean Pierre said he liked my CDs and he likes jazz and blues!  Once I get past playing for a few nights I won’t be so nervous!

I played my first night and it seemed to go well.  I got a request for “As Time Goes By” and some people took pictures of each other with me and the piano!  Lynn helped me with a list of contacts including Samir, a drummer from Philly who lives and works as a musician in Casablanca!  I’d met several other friends of Lynn before she left this morning.

Last night I had dinner during a long break–my schedule is somewhat split. I ate in Cafe M, the restaurant with Moroccan food, and there is a large local band playing there.  I counted 10 musicians—2 violins, at least 3 drummers, and electronic cello(?), an electronic keyboard player who sounded like an accordion some of the time, and others–on the stage, and there was also a dancer, a male singer and a female singer. The violins played their pitch-slides in excellent unison, and the percussion was hypnotic. They sat in chairs, wore white shirts and ties, and nobody was reading music. It seemed to be Moroccan traditional music, probably sung in Arabic, and I saw some people quietly singing along at their tables–tables exotically decorated and low to the floor. The lights were low, and I ordered couscous with chicken and vegetables. The waiters wore bright Moroccan outfits with the round flat-top hats like in the movie. It was hard to believe I was there!

Tonight I’m playing for a corporate party poolside for the 150th anniversary of  blue jeans, and I’m wearing jeans. Doesn’t seem quite Moroccan!

The poolside party went great—it was quite foo-foo—people seemed so dressed up and elegant even wearing blue jeans. Even the managers wore jeans.  I played blues and boogie-woogie for a couple short sets and got very little response though people said they liked it. Typical of cocktail parties everywhere I guess!  After me was a bizarre acoustic guitar trio and one guy sang–Elvis songs. Every song was an Elvis song with an Arabic accent.  They were nice guys though and I found out they are from Rabat, a little north of here. Then I went back to play in the hotel bar, and—sure enough—there was a request for “The Song”……….as time goes by………

I think I’ll get my internet connection in a few minutes, then I’ll post this. Hope to hear from everybody, and I hope I can be regular in my updates!

40-second video of Steve in Morocco