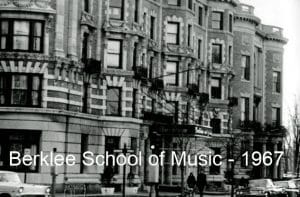 In the summer of 1967, I was fortunate to attend Berklee School of Music in Boston where my classmate, Michael Brecker, and I played together in a student combo.

Michael Brecker played tenor sax, and he was considered a musician’s musician. After I knew him at Berklee, he went on to play with jazz giants Horace Silver, Chick Corea, Herbie Hancock, Quincy Jones, and many others. He can also be heard on hundreds of rock and pop recordings including those of Steely Dan, Joni Mitchell, Eric Clapton, Billy Joel, John Lennon, Frank Sinatra, Average White Band, Paul Simon, and James Taylor. My favorite Brecker solos are heard on James Taylor‘s “Don’t Let Me Be Lonely Tonight” and Paul Simon‘s “Still Crazy After All These Years.” With his talent, hard work, and probably a little luck, he beat the odds and achieved the kind of success that most of us jazz musicians only dream about

How did Michael Brecker make the journey from being a talented student musician to becoming one of the most sought-after jazz performers in the music industry? What twists and turns and challenges did he endure? I don’t know all the details, but I watched his journey from afar, and it affected my musical thinking and musical life.

The following video features one of Michael’s more interesting solos on the song “Maxine” from Donald Fagen‘s album “Nightfly.” His solo starts at 2:28.

Unfortunately, Michael died in 2007 at the young age of 57 from the blood disorder MDS.

When I met Michael Becker at the Berklee dorm in Boston in 1967, we were both 18 and we’d both won scholarships to Berklee that summer. Michael quickly formed a quintet, and asked me to join playing trumpet, my major instrument. We played such tunes as “Sidewinder,” “Watermelon Man,” and “Maiden Voyage.” We also did “Milestones” at a break-neck tempo. We didn’t use written music. I played the lead lines with Michael, and the arrangements came easily. I followed his phrasing and inflections. My solos were usually sparse, but expressive and in the groove. Michael noticed all this, and complimented me. He said his older brother Randy, an up-and-coming trumpet player, had been criticized for playing too many notes.

The only gig we played was at a crowded little coffee house on Boylston Street called the “Unicorn.” It was one of the most memorable gigs of my life. When we played “Milestones,” the crowd went wild. I played probably the longest and most note-laden trumpet solo of my life. Michael played a solo even longer–about 30 minutes! The emcee, a Boston deejay said Michael’s tenor work was some of the best he’d ever heard.

I was in a reverie for days after that gig. The drummer on the gig was 16-year-old phenom, Mike Levinson, from New York City. We hung out and eventually got a duo gig at a downtown strip club (See my blog post “A Jazz Journeyman”) I told Levinson that I couldn’t stop thinking about Michael’s epic solo on “Milestones” on that gig. Levinson said, “You played pretty fucking good yourself.”

The level of musicianship Berklee students was higher than anything I’d ever experienced, even among professional musicians in the Chicago area. At Berklee that summer, Michael was considered the “top dog.” I remember one evening when students in the dorm gathered in a large basement rehearsal room while Michael and a drummer performed into the night. Most of us sat on the floor transfixed as he played “sheets of sound” á la Coltrane.

When John Coltrane died that summer, it was very much noticed by Berklee students. I talked briefly with Michael about it. He didn’t say much, but I could tell he was deeply moved.

Michael was obviously talented, dedicated, and already committed to a jazz career. He practiced long hours, and often. His teacher had him playing blues in all keys, and he said it was a challenge for him. He had a dress tie that he tied around his head like a bandana, to keep his long hair out of his eyes, while he practiced; and he also blocked off the small window in the door to his practice room. But we could always hear him when he was practicing as we walked down the hallway.

He and I would hang out in his dorm room playing records. He played Joe Farrell, whom he was copying at the time. Joe had attended University of Illinois, which was where I planned to attend that fall, so I felt I had made a good choice. Michael talked about changing his name to “Booker” since it seemed like a better name for a jazz musician.

The most excitement came when he played the latest Beatles album, “Sgt. Pepper’s.” I was hearing it for the first time. He thought the album was brilliant, except he didn’t like George Harrison‘s Indian music track “Within You Without You.” I remember at the time being fascinated with that particular track. A short time later I got deeply into Indian music and Yoga philosophy.

Michael attended University of Indiana that fall while I was at University of Illinois. I read in Downbeat that Michael had won numerous awards at the Notre Dame Collegiate Jazz Festival. Reading the article and seeing his picture in Downbeat, I was both awed and proud, plus a little jealous! I called him up, and he invited me to visit.

In the spring of 1968 I went to see Michael at his dorm room at Bloomington, Indiana, and congratulated him on his awards. Some music critics had said that his performances at the festival were rock/funk orientated, therefore not “pure jazz.” He was proud that he had forged ahead with this style. He played a recording of his brother Randy with Blues Project, predecessor to Blood Sweat and Tears of which Randy was a founding member. By that time, Randy had already left the group and was playing with jazz giant Horace Silver. Michael encouraged me to go hear Randy at the Plugged Nickel in Chicago, but, unfortunately, I never made it.

Michael was excited to play me a straight-ahead blues recording of Eric Clapton (who he later played with). He said he considered him a “great artist.” I listened carefully to Eric’s expressive note-bending and became a lifelong fan. That evening, Michael had a gathering at his dorm room, and I met several of his musician friends, and I was flattered when they said Michael had been telling them about me. The party commenced while several dropped acid. I declined. I found a white sheet, put it over my head, and sat cross-legged on the floor in yoga meditation. One of the girls at the party briefly joined me under the sheet, which was fun, though I declined her advances!

I never talked with Michael again after that, but I followed his career. His brother Randy was a big help in getting him quickly established on the New York scene. I heard his album with “Dreams,” a New York band with Billy Cobham on drums, that he had formed with his brother. I bought the first two Brecker Brothers albums, and went to see the band perform in 1976 in Detroit a couple of times. The band featured Will Lee on bass, and Dan Grolnick on keyboards. “Keep It Steady” was a dance hit in Detroit, and with local live bands it was hip to have Brecker Brothers songs in the repertoire. I also saw Michael perform an extraordinary show at the Jazz Showcase in Chicago in the 90s with his band including Larry Goldings on B-3 organ. I wanted to talk to Michael, but it was a very large crowd, and he was unapproachable.

In 2011 I met Michael’s widow, Susan Brecker, at the Sedona Film Festival and saw the film she produced, “More To Live For,” about Michael’s fatal disease. The film was a moving documentary which explained how MDS can be fully cured if a matching bone marrow donor is found. The film featured some of Michael’s playing, including footage of him performing with James Brown. Susan was part of a discussion after the movie, and advocated strongly for bone marrow registry drives in honor of her late husband, something Michael would have wanted.

In the evening after watching “More To Live For,” I was playing piano at my gig at Dahl & DiLuca in Sedona, and Susan came in for dinner with her group. I couldn’t help but wonder, what kind of a gig would Michael be playing that evening if he were still alive? I chatted with Susan briefly and she was interested to learn that I had gone to school with Michael. She said she liked my piano music! I said, humbly, that I was just playing “tunes” in a restaurant. She said it was a pleasure to hear it. I hope Michael liked it too!