In June, 1989 I had the opportunity to produce my first recording session. I already had some experience as a hired session musician on commercial jingles, yoga chants, and songwriters’ demos. I had the idea of producing my own session singing and playing with jazz musicians performing blues standards. Since I had a wife and five teenage kids, I had little or no extra money. It was a surprise when my sister Mary and her husband Tom, who knew this was my dream, graciously offered to pay for my project. I started putting the wheels in motion!

The first thing I did was to consult my mentor Judy Roberts, “queen of Chicago jazz” and an experienced recording artist, and asked her where she did her recordings. She strongly recommended Studio Media, one of the top recording studios in the Chicago area. I felt I was in a little bit over my head, so I talked to possible producers who could help guide me through the recording process. When I met Benj Kantors, the engineer at Studio Media, he told me he’d had a lot of experience as a sound man mixing live music at area clubs, such as Amazing Grace. We talked about doing a “live” recording session, which would eliminate costly post production mixing and editing. That idea seemed somewhat daunting, recording “without a net,” but I felt assured that, with Benj’s help, I could get through the process without hiring a producer.

When it came to picking the musicians, I felt like the proverbial kid in a candy store! I hung out at Andy’s and other jazz clubs, and asked my old friend bassist Dennis Carroll to play on the session. I especially wanted drummer Marshall Thompson to be on the session, and Dennis introduced me to him at his gig at Andy’s, a well-known Chicago jazz club. Marshall had been the house drummer for many years at the London House where many legendary jazz stars had performed. Marshall agreed to do the session, and I was thrilled!

I also wanted to add a tenor sax player to the session, but had some trouble choosing. Chicago at that time had many great tenor players, including Von Freeman, Eric Schneider, Jim Massoth, Franz Jackson, Lin Halliday, Eddie Johnson, Mike Finnerty, Greg Fishman, Tony Vacca, and many others. I went to the Green Mill to meet the Von Freeman, top-dog tenor player in the Chicago, and Dennis Carroll was on his gig. While Dennis and I were sitting at the bar, Von stopped by and Dennis asked him about playing on my session. He said, “Sure!” as he flashed a big smile. It seemed too easy. I can’t remember why, but Von didn’t work out in the end.

Then I went to another north side club called Oz to check out Lin Halliday. I met the piano player, Jodie Christian, a phenomenal player and a very gracious man. Then I introduced myself to Lin and talked to him briefly about doing a recording session. He seemed open to the idea. I went to several of Lin’s gigs. He played with vibist Jim Cooper at a Lincoln Avenue club called Deja Vu. I heard him play the song “It’s You Or No One,” which I started singing on my gigs and then eventually used it on the session.

I also went to see Lin play at the “Get Me High Lounge” which was on Honore St in a somewhat run-down neighborhood near Diversey west of the freeway. Lin played there often and usually attracted a good sized crowd. The club was open late, and a lot of musicians hung out there. One night I met NYC musicians pianist Michael Weiss and bassist Dennis Irwin who both sat in with Lin. It was said that Jimmy Carter stopped by there one night to catch some Chicago jazz. I got to hang out there and chat a little more with Lin. He told me that he had auditioned for Maynard Ferguson’s band and beat out Hank Mobley to make it into the band. One night in New York about 1960, Maynard’s band opened for Miles Davis, and Miles invited Lin to play with him. I felt honored when Lin agreed to play on my recording session! 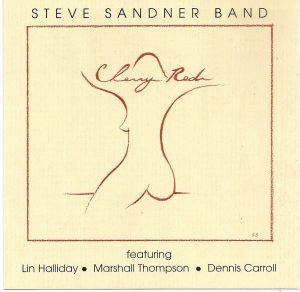 The day of the session came, and I planned to record enough material in one day for an album. We had no prior rehearsal. I had carefully researched a lot of blues tunes and made a list. Dennis and Lin drove together, and they were late for the morning starting time at the Evanston studio. We all played in one room with Marshall in the drum booth. I had no charts or written lyrics, and I just called off tunes from my list. Lin had a lot of nervous energy, though he played great. He moved around the room as he played, and Benj had to yell at him at one point to stay near the mic. He had a 12 pack of beer with him and consumed most of it in the morning. We recorded about five or six songs, mostly in one or two takes and took a break for lunch. Dennis told me that Lin wanted some advance pay for part of the session. I gave him $50 and he disappeared. I never did find out where he had gone.

During the break, we went into the control room and listened to what we’d recorded. I was horrified, I noticed all my little mistakes, and worst of all, my “time” seemed off I places. I mentally made note of my life’s experiences and wondered if there was another, better way to make a living. However, the recording quality was technically superb, and some of the songs sounded great. Lin’s solo on “God Bless the Child” sticks out in my mind.

I also sat down and chatted with Marshall. He talked about some of his experiences playing at the London House, also playing with Mose Allison and Duke Ellington. Hearing him talk was inspiring to me. Marshall also had a calming effect on the entire session with his natural, focused swinging style and his occasional suggestions. He was very supportive and told me the quality of the recording was definitely good enough to put out on an album.

When Lin didn’t show up after the break, we started the afternoon session without him. We recorded as a trio, “I Got It Bad,” an Ellington tune. Lin finally returned, with another 12-pack of beer, and we continued recording until we had a total of 11 different songs. I used all of them for the album.

CDs were not mainstream then, and vinyl was beyond my budget, so the album was released on cassette. Amazingly, the musicians only asked for $100 apiece as a great favor to me. To get the cassettes, artwork and design I had to ask my sister for additional money. I sold the cassettes on my gigs and came close to recouping all the costs. I offered to pay my sister back, but she generously suggested that I put the money toward my next recording project, which I did. That was “Goin’ To Chicago” with trumpeter Marcus Belgrave.

Years later, I had the analog recordings transferred to digital and “Cherry Red” was released as a CD with the alternate takes. Marshall died in 1991, and Lin passed away in 2000. Though Lin’s genius has never been fully captured in his recordings, some say that the “Cherry Red” session comes closest. With all its quirks, it is now part of Chicago jazz history.